The protest came before kick-off at Stade Abdoulaye Wade, where Senegal avenged a 1-0 first-leg defeat with victory by the same margin, before winning a controversial penalty shoot-out.

When it came down to spot-kicks, Egypt’s players had lasers pointed towards them by home fans, a likely distraction as three visiting players, including Liverpool’s Mohamed Salah, failed to convert.

That allowed Senegal to win 3-1 in the shoot-out, with Salah’s club-mate Sadio Mane netting the winning strike.

It had been a challenging day for Egypt even before the game began, with pictures posted by their national football association indicating the team bus had been struck by missiles on its way to the stadium, which is situated a short distance outside Dakar.

One window was shattered, while evidence posted on social media by Egyptian authorities showed an apparently cracked windscreen and a rock that had been thrown into the vehicle.

The Egyptian FA (EFA) also posted a picture from inside the stadium of a banner reading “F*** YOU SALAH”.

The EFA said in a statement: “Egypt files an official complaint against Senegal due to the attack and the racist banners.

“The Egyptian team was subjected to racism after offensive banners appeared in the stadium stands for the players, specifically Mohamed Salah, the team leader. This was documented with pictures and videos that were attached to the complaint.”

Egyptian media said the complaint had been filed to CAF – the African confederation – and world governing body FIFA. 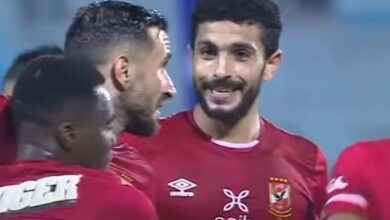